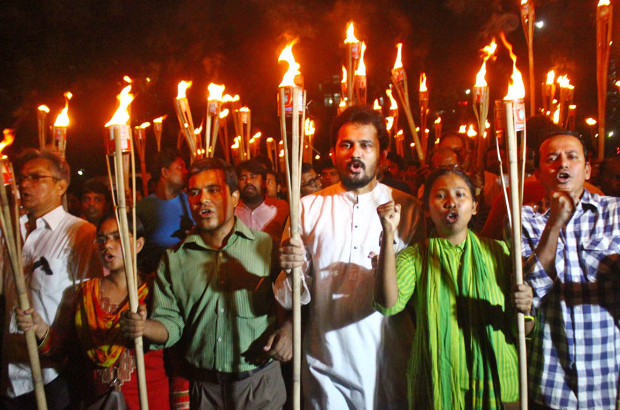 Abstract
The Shahbag Movement, demanding capital punishment for war criminals of the 1971 liberation war in Bangladesh, emerged in February 2013 in Dhaka. This youth-led grassroots movement erupted in response to infuriating establishment party politics as a populist third force, wanting closure to the painful memories of Bangladesh’s freedom struggle by seeking justice for the atrocities of 1971. However, perceived as siding with secular forces, Shahbag became instantly embroiled in adversarial party politics and appears to have been hijacked, as is argued here, by both major political parties of Bangladesh. Evaluating Shahbag as a case study for the framing tasks theory of social movements, the article supports its analysis through detailed empirical findings. Viewed historically, Shahbag may be treated as an initially powerful grassroots youth movement, akin to ‘Arab Spring’ phenomena, later stolen from the people of Bangladesh. However, a deeper analysis of Shahbag’s dynamics, accounting for the impact of the controversial national elections of January 2014, yields crucial insights about the continuing scope for a ‘third force’ in the forthcoming elections scheduled for December 2018.

A working version of this paper was published by the Bangladesh Research Center (BDRC). That version is vailable on SSRN and RePec.

This site uses Akismet to reduce spam. Learn how your comment data is processed.

This is “Pages” Sidebar

Scroll back to top